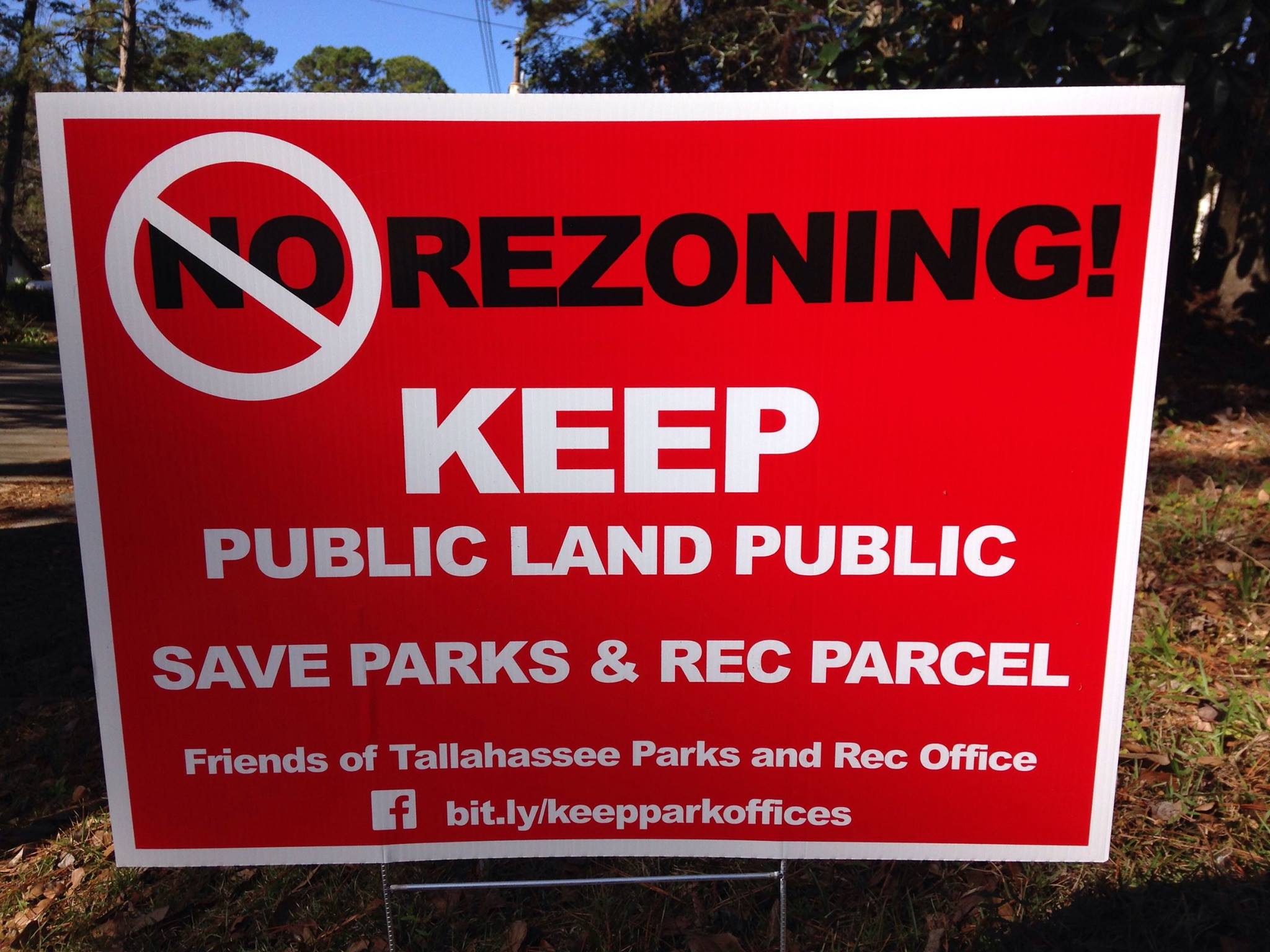 Let’s pull ‘em up . . . and hope for the best! On Tuesday, February 22, the Tallahassee City Commission voted to withdrawal the Comp Plan Amendment for Myers Park rezoning

Based on the City Commission’s withdrawal of the Myers Park comp plan amendment, I ask everyone to pull their No Rezoning yard signs. This is fantastic news! However, the wheel’s still in spin, so you may want to hold on to those signs. Throughout this Myers Park controversy, I’ve been very impressed with Betton Hill’s willingness to put up signs or, for those that didn’t, to not complain about the signs being up. I admire your commitment to keeping parks parks and neighborhoods neighborhoods!

Comm. Ziffer’s proposal regarding leasing park land for a center for people with developmental disabilities presents a thoughtful option, but is no silver bullet (as I think he’d be the first to agree). Let me present some of the issues as I see them. As caveats, I have a brother with Down Syndrome and I’m painfully aware of the issues of finding a suitable and appropriate living arrangement for him and other adults with developmental disabilities. I consider myself an advocate for their community integration and well-being.

Let me clarify, too, that the Progressive Pediatrics facility is no group home in the traditional sense of a small home nestled in a residential neighborhood with supportive services as necessary. Their model is a large residential, service, and training facility, in this case housing at least 60 individuals. I must admit that I find this service model rather perplexing as for the last 40 years the small group home has been the desired option as it is the closest to a “normal” living arrangement.

OK. With that background on me and Progressive, the key issues are: Should park land be used for a non-park-related facility, no matter how admirable that facility’s purpose? In other words, should public parks remain parks? Are there other locations in Tallahassee that would better serve the needs of the adult residents and Progressive? Is there some division possible in which some of Progressive’s functions could be done on park land and some in other locations? How would the precedent of having Progressive sited in Myers Park open the floodgates to non-park uses in other parks?

The best aspect of the Commission’s pulling of the comp plan amendment is that it will start a dialogue between the City, the Myers Park area neighborhoods, Tallahassee neighborhoods in general, and, in this case, representatives from Progressive as to how to use Myers Park, how to control the sound from Cascades Park, how and if the park is appropriate for a Progressive-type facility and/or service of some kind, and how to appropriately protect all our parks for current and future residents. This dialogue was woefully lacking up to this point. While the focus at this time is Myers Park, these issues and their dialogue affect parks and neighborhoods throughout Tallahassee. I, for one, look forward to an open and honest dialogue among the parties to come up with the best possible solution for all involved.