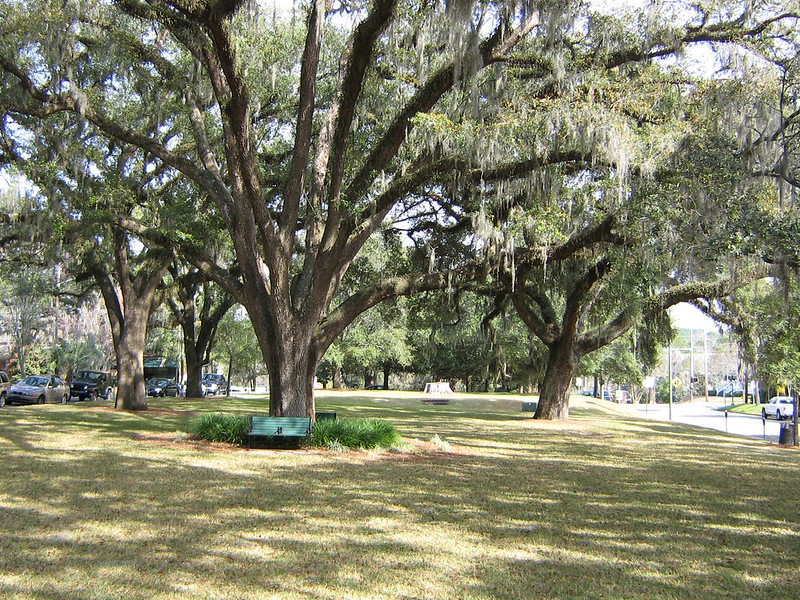 When I plant a tree, I expect it to be there for a 100 years or more! That doesn’t always happen. We planted a tulip poplar in 1979. It grew beautifully into an 80 foot tree but was blown down, completely uprooted, during Hurricane Michael. In retrospect, I believe the tree would still be standing if we had not planted it in the open where it stood all by itself, exposed to Michael’s wind gusts. We should have planted it a mere 20 feet away at the edge of the existing urban woodland that we maintain along the canopy road on Centerville Road. The trees clustered together in this piece of woods — winged elm, swamp chestnut oak, black cherry, live oak — all stood together protecting each other.

There are so many trees from which to choose. When you visit a plant nursery, have an idea of the amount of sunshine you have in your yard and how large you would like the tree to grow in the future. Also, dig down into the soil and be able to describe the texture of the soil — very sandy, heavy clay, loamy clay, rich dark soil and so on. Does the spot where you want to plant collect water after rainfall? Different trees have different soil, moisture and light requirements.

By far the biggest mistake people make in tree planting is digging a hole too deep and burying the roots too deeply. This will cause the tree to decline over time and eventually die. Dig a very wide but shallow hole, only deep enough so that root ball is planted slightly higher than the ground.

Unfortunately, this problem is exacerbated by sometimes shoddy work that happens at some wholesale nurseries. Often the trees are planted too deeply in the pots when transplanted from small pots to larger pots.

It is important to scrape the soil away from the top of the root ball until you reach the first side root of the tree. There may be an inch or even two of soil to remove depending on how many times the tree has been transplanted during the growing process. The root flare should be placed slightly above the ground level. Refer to the planting guide below (fig A).

The best time to plant a tree is during winter. Florida’s Arbor Day is always scheduled in the prime planting time of January. Trees are dormant in the winter and will not require as much watering as ones planted in the warmer months.

We often think that bigger is better, but in the case of trees, you can achieve greater success by planting smaller trees. The bare root seedlings of native trees when planted in the winter are particularly robust. Their roots have never been confined in containers. Younger trees in 3 gallon containers and seven gallon containers have had less time to become root bound and, when planted correctly, grow very quickly.

Water is important for success. Water regularly, several times per week if possible in the heat of the first summer and then move towards once per week watering and then as-needed. The tree will need to be watered through droughts for the first few years until it becomes established.

What the science says

What do scientists have to say about this? Researchers at the University of Florida advise that if irrigation cannot be provided for the recommended period after planting, smaller nursery stock should be planted to ensure survival. UF also reports that because small trees establish more quickly, they are better able to compete with weeds and have become wind-firm sooner, which is obviously important in storms, than larger nursery stock.

The benefits of planting native species

As more development occurs in Leon County, consider choosing native trees, especially if you are concerned about habitat for birds and other wildlife. The latest research published in Proceedings of the National Academy of Sciences and reported on Smithsonian.com, shows how quickly songbird populations fall off when neighborhoods are planted primarily with non-native trees and shrubs. Native plants produce many more caterpillars and other insects with which birds feed their young. The study concluded that in areas made up of less than 70 percent native plants, Carolina chickadees will not produce enough young to sustain their populations. At 70 percent or higher, the birds can thrive.

Something you can do at home to affect positive ecological change is to plant native trees and shrubs. This does not mean that everything in your yard must be native.

In our yard we try to increase the percentage of native plants every year. When the old Rose-of-Sharon aged out and died, we replaced it with a blue beech tree. When we removed all the invasive nandinas, we replaced them with Florida anise, agarista, needle palm, bluestem palmetto, and American beautyberry. One section of sunny lawn became a butterfly/pollinator garden. What was once 100% non-native (except for the pines and oaks), 27 years later is closer to 90% native. The Carolina Chickadees are very happy!